"We are delighted that so many of our team members provided their feedback on our workplaces and we look forward to working together in seizing opportunities for improvements in the future," says Meghan Scherer, Steeves & Rozema human resources co-ordinator.

"The (results from enterprises division) show that they're confident, that they're engaged and they're going to take an opportunity to honestly tell us what they think."

The purpose of the survey, which was conducted in the spring by Metrics@Work, a third-party organization, was to hear the opinions of Steeves & Rozema team members throughout the organization in an effort to use their comments to strengthen the company and make it the best workplace possible.

"We want to put the good-news story out to recognize the efforts of our team members and our managers who were committed to making this a success within our homes and locations, and we want to thank employees for taking the survey," Scherer says.

Throughout the organization, Steeves & Rozema achieved 64 per cent engagement, a result that surpassed the goal of achieving 60 per cent participation from both long-term care and enterprises division, which includes staff members from head office, retirement homes and property management.

Steeves & Rozema also offered incentives to encourage and reward staff members for their participation in the survey.

Survey questions focused on team members' satisfaction with their job, how they like to be recognized, communication and their opinion of the quality of service provided.

The executive team, along with assistance from Metrics@Work, will be reviewing the survey results and hope to have the results by the end of summer.

Key highlights of the survey for enterprises division: 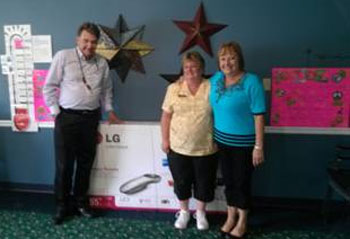